I’ve neglected this blog for some time.  I do think I have some valid excuses though.  It’s just that in the past few months we had our first baby, changed jobs and moved to another country.  As you can imagine, it was a bit hard to concentrate with all this going on.

Well, as the title says, we are now in Hong Kong, after having spent, in my case, 8 years, 3 months and 2 weeks in the sands of Arabia.  I recently got headhunted by a firm here, and was glad to have the opportunity to experience yet another region of the world.  Now that we have settled in a little bit, I felt like sharing some first impressions of the place.

First of all, it’s CROWDED.  I’m talking Mardi Gras on Bourbon Street crowded.  Except it’s just a regular work day, and the clock shows 7 pm.  Human flesh moves on conveyor belts, office workers try to make their way home after another long day of slaving themselves to evil corporations.  7.5 million people are trapped in an area of only around 1,000 sq km, or about half the size of the island of Mauritius.  The inhabited area is actually less than half of that, due to the tough, mountainous terrain.  When you try to walk down the street in a busy area like Causeway Bay, you have to constantly dance and jump around people who always seem to be in your face no matter which turn you take.  It’s so crowded you actually have to queue up to get on the escalator, and queue up again to get in the metro train.  The good thing is, people actually queue.

Queuing up to take the escalator – Causeway Bay MTR station.

It seems to be a very rules-based society.  If you lose your dry cleaner’s receipt, you pay a HKD 5 penalty.   If you need to put something like a piece of luggage or a baby’s stroller in the trunk of a taxi, you again need to pay a HKD 5 surcharge.  When you check in to a hotel apartment, someone comes with two sets of papers, one containing an inventory of every single item in the room and the other with the pictures of those items, and you go through the papers one by one and sign them to confirm that the room really does have all those things and that they are in good condition.  These are just a few interesting things that I have come across in our first two weeks.  I am sure there are a million more.

If you like Asian food, Hong Kong is heaven.  There are great Chinese, Japanese, Vietnamese, Indonesian, Thai and Korean restaurants all over the place, from Michelin-starred joints to simple street shacks offering sliced pork or duck with white rice.  The food is probably one of the best things about being here.

One of the stranger menus we have seen.

Like with most Chinese cities, Hong Kong has an air pollution issue.  Even though the MTR (metro) goes to most places, they still have a lot of cars, trucks and buses on the streets, suffocating the city with toxic fumes.  Add to that heating-related increase in greenhouse gases in the winter and the downwind pollution from the nearby industrial cities of Shenzen and Guangzhou, and suddenly it becomes a wise idea to invest in a face mask.  Apparently the cheap masks sold throughout pharmacies and supermarkets are useless in dealing with particulate matter.  The only “supermask” that blocks those is 3M’s N95 model.  We are currently researching where to buy these locally or online.

Properties are tiny and extremely expensive.  We have just leased an apartment that has a net area of 612 sq feet (around 57 sq meters) and will be paying close to US $ 4,000 for it per month.  And we sort of got a “deal.”  We had an apartment twice the size of that in Abu Dhabi, for which we were paying half the rent, and that was already expensive compared to Istanbul prices.

Old vs. new. I work in the big glass tower in the background.

Overall, Hong Kong has the feel of a Western city like London or New York in many areas, but sometimes you turn a corner and it suddenly becomes an exotic Eastern city with dodgy-looking alleys, funky food smells and street vendors selling random things.  It’s another one of those “east meets west” cities.  So far we really like it, and fingers crossed, we think we will grow to like it even more in the days to come.

There are quite a few of these traditional places next to Western-style coffee shops and delis.

A view towards downtown.

Happy Valley racecourse, where poor horses are exploited on a regular basis.

Street tram. The regular ones are not so fancy, this one is apparently for tourists. 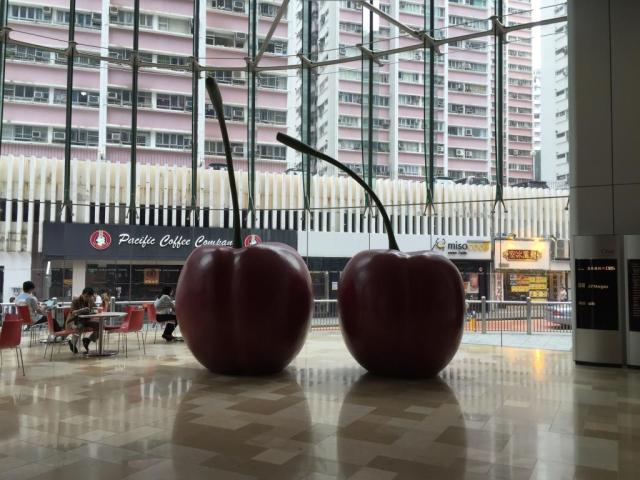 A lovely statue in the lobby of my building.

An earlier attempt at mass housing. For a developed place, they have way too many of these crappy buildings around.

Another great statue near my work.

Even the trams are double deckers.