In my expat days, I used to visit and write about countries like Sri Lanka and Vietnam. Now I’m writing about New Jersey. What a difference a couple of years can make. But I’m not complaining. Maybe my travel destinations have become a little mundane, but it still feels good to be back in the U.S. after all these years.

As soon as I write that last sentence, the guy sitting next to me at Starbucks starts to rap along to whatever’s in his headphones: f*** this, f*** that, unintelligibly fast sentences, s**t b***h (this a good twenty times), more unintelligible stuff, m.f. n-word… Five, maybe ten minutes pass. He doesn’t shut up. I get up and change tables, but the store isn’t big enough to tune him out completely.

Despite him, and the orange goblin who took over, it feels good to be back in the U.S. There are a lot of things I’ve missed about the place, from the red brick buildings to the live music scene. And let’s not forget about crispy bacon – I’d had enough of the chewy English variety. Don’t get me wrong, expat life was great, but that stuff doesn’t last forever and it’s foolish not to make a more permanent move at some point. Besides, who says New Jersey can’t be interesting?

Spacemonster tentacle is a local delicacy.

In the U.S., it’s popular to hate New Jersey for some reason and a lot of people would take my earlier sentence to be sarcasm. I wasn’t even sure if I was being sarcastic. To be fair, parts of it do feel like the hairy armpits of NYC and Philadelphia. At other times, it’s just plain boring. But that’s not to say the state is completely devoid of nature, history or culture. For one thing, it’s home to the lively community of Union City.

Armenian Church, with the Union City Public Works building in the background.

Now a guy slams into the clear glass panel with his newly bought cup of coffee. Latte everywhere. I thought this stuff happened only in the movies. He was so close to the door, too. They really should hang a poster or something. The barista tells him he’s the second one today, as he rushes to the scene with a stack of napkins and a mop. This has to be the most distracting Starbucks ever. I think it’s time I get out of here.

Ok, let me try this again: Union City lies to the West of Manhattan, across the Hudson River. It was the first place my family and I lived in the U.S. It’s hard to believe it’s already been a year and a half.

An old beaut in front of The Monastery and Church of St. Michael the Archangel, currently home to the Hudson Korean Presbyterian Church

It was Spring 2015. We were in Hong Kong, trying to figure out which part of the U.S. to move to, having recently made our decision to immigrate. We toyed around with some ideas as we went through the multitude of “best places to live in the U.S.” lists we came across on the internet. We fantasized about Seattle, Portland, Boise, Asheville, Burlington, Boulder, Raleigh-Durham, Austin and other notable places in Hipsterville, USA. Reality eventually sank in though and we realized those cities probably wouldn’t offer a lot of job opportunities, at least not for us. It would have been a different story if we were a couple of geeks with Macs who could work from any Starbucks, doing whatever it is those types do (the fact that I think they are a homogeneous “type” shows you how clueless I am), but unfortunately we’re not. Since I’m in insurance, we decided we should be in the New York area because that’s where most of the financial industry jobs are. We also didn’t want to pay rent through the nose while looking. At the end of our lengthy search on AirBNB and Google Maps, Union City came out on top in terms of having the best combination of proximity to NY and affordability (by NY standards).

Arriving in Union City was a bit of a culture shock because almost everything we saw and heard around us was in Spanish. It hadn’t crossed our minds that a place in the Northern part of the U.S. could have a dominant language other than English.

Our apartment was on the ground floor of a three-story building, supposedly built in 2005, but felt and creaked like it was from the sixties. Our landlord promised to cut the grass in the backyard once a week, but never did. The overgrown lawn had become prime tick habitat by the end of our month-long stay.  Thanks to plywood or whatever they use to build floors in this country, we could hear every move of our upstairs neighbor Ramon, his family and his dog. Not the best arrangement when you are trying to put your ten month-old to bed. Every now and then we would hear series of loud, ominous thuds from the garage next door, like someone was beating up on someone or running an illegal meat processing operation. Ramon’s old white van, which was always parked in front of (but not inside) the garage, and the dirty gloves on display on the windshield were also somewhat unnerving. We had visions of poor victims being kidnapped in the van, then tortured and chopped to pieces in the garage. On a conscious level we were just joking around of course, but I think subconsciously we couldn’t wait to move out. In the end, it turned out that Ramon was just a regular blue collar guy with a work van and his son an aspiring boxer who practiced on his punchbag in the garage (yawn). I learned about all of this when I went upstairs to ask them to be quieter so my daughter could take her afternoon nap. I think I subconsciously softened up my tone a bit when I found out his son was a boxer.

A house with a Puerto Rican flag.

Cubans are the main immigrant group in Union City, although their share of the population has been on the decline lately. The city’s nickname still remains “Havana on the Hudson.” Other sizable communities also tend to be Hispanic and include Salvadoreans, Hondurans, Colombians, Puerto Ricans and Dominicans. 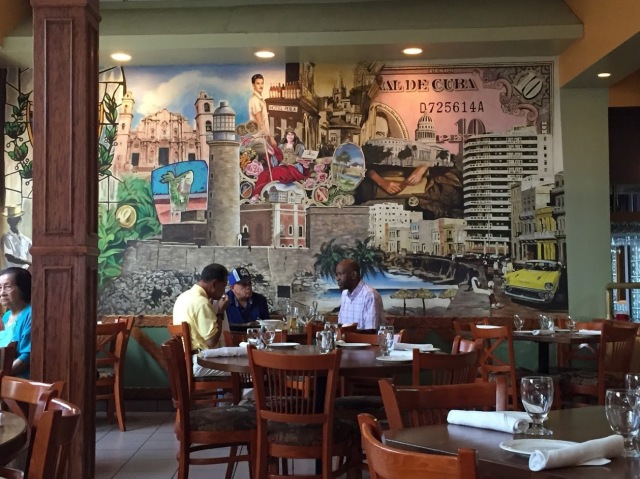 Inside the Mi Bandera Cuban restaurant. 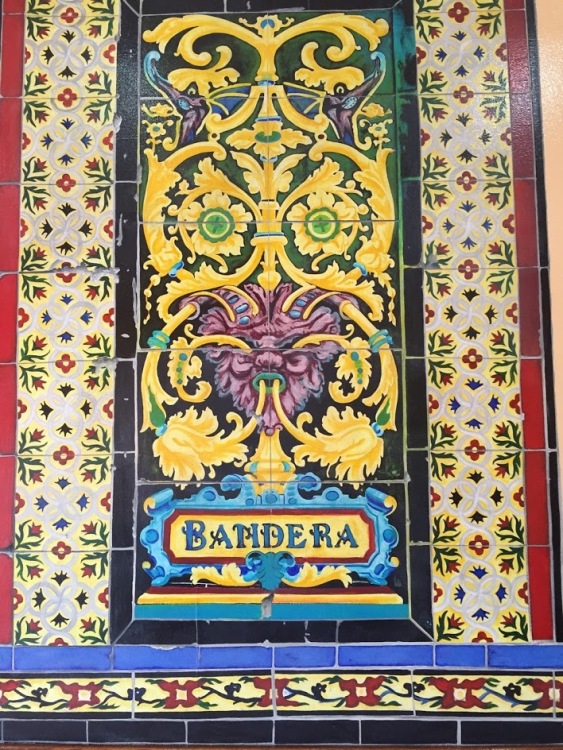 Want to know a little bit about the town’s history? Let me save you the hassle of reading the Wikipedia article: The first dominant immigrant community was the Germans, who started to settle back in the mid-19th century. By the early 20th century, Town Hall meetings were conducted and recorded in German. Along with the Dutch, Austrian and Swiss immigrants, Germans founded and developed the embroidery industry, for which Union City became nationally famous. The industry then attracted Irish and Italian immigrants around the middle of the 20th century, and was soon followed by Cubans and eventually other Latino immigrants. Today, Hispanics make up about 85% of the town’s population.

Every year a Cuban Day Parade is held on Bergenline Avenue, the main drag that bisects Union City and the neighboring towns of West New York and North Bergen. 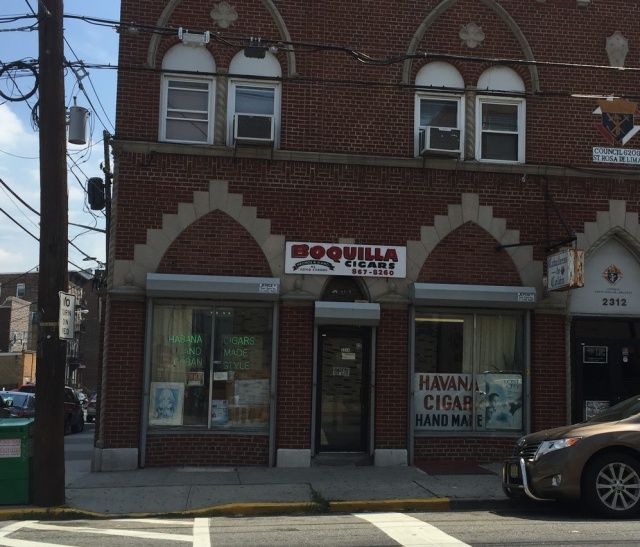 If you’re looking for Cubans made in New Jersey, look no further.

There’s a thin stretch of blocks between Union City and the Hudson River called Weehawken, which is technically a separate town, but doesn’t have a center of its own and feels more like an extension of Union City.  It has stately old homes, a great waterfront park and some of the best views of Manhattan, so I would recommend you stop by if you’re in the area. I fondly remember our dinners on the patio at Charrito’s, one of the best Mexican restaurants I’ve ever eaten at, admiring the Big Apple in all its glory while enjoying our tacos, freshly made guacamole and margaritas.

Manhattan, as seen from Weehawken.

Speaking of culinary gems, Casa Di Napoli on 32nd Street is an amazing Italian restaurant, not only for the food but also the decor, which gives the feeling that you are eating in an Italian grandmother’s home. 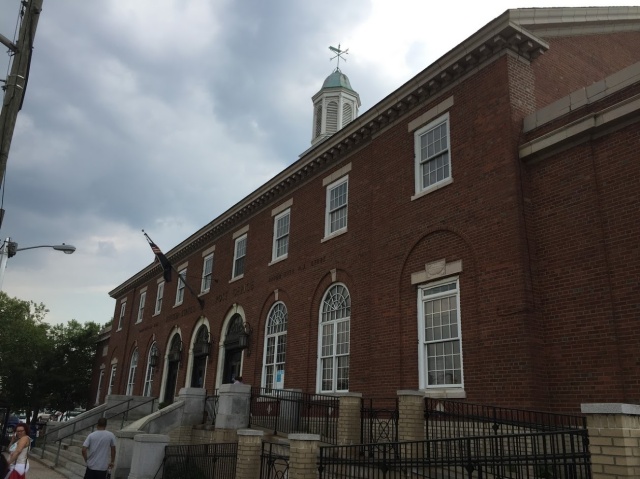 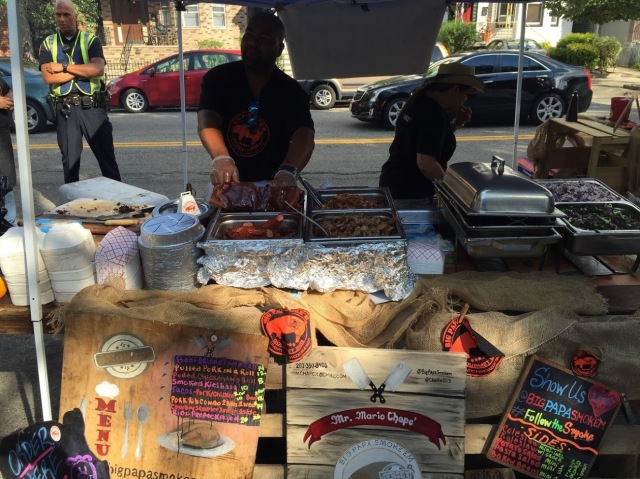 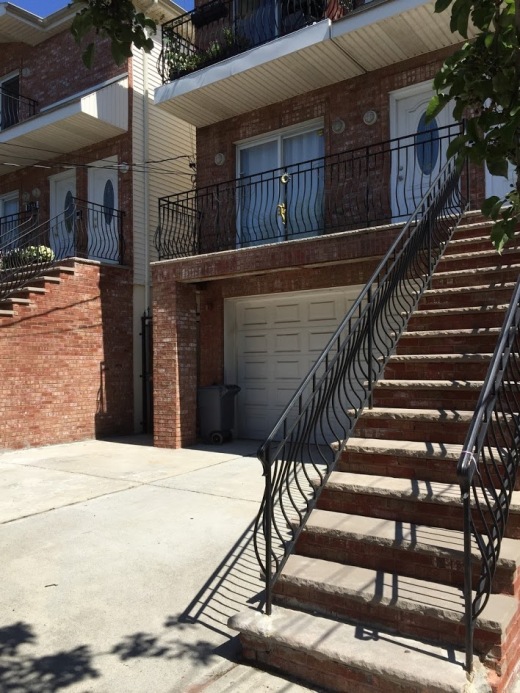 Our apartment was on the ground floor of this building, accessed through the narrow corridor to the left of the garage. Don’t let the brick-and-mortar look fool you; these newer buildings are made basically of cardboard.

Our backyard, with the plastic dragon thingie in the foreground – a fixture of our apartment, probably left by another AirBnB guest.

Union City can be charming in places, but it also has a rough edge to it. There were a lot of families, but every now and then we saw some dodgy types, too. And while we never encountered any real danger during our stay, we didn’t exactly feel like going out for night strolls, either. Is it a livable town? Sure. Interesting for the first time visitor? You bet. Would it be our first choice if we ever had to live in the NYC area again? Probably not.

Our favorite Greek bakery, run by an elderly Greek immigrant couple and their grown son.  Originally from my hometown of Istanbul (or Constantinople, from their viewpoint), they are some of the last remaining European immigrants in Union City.  It was a nice surprise to see pictures of my hometown on their walls.  The baklava was easily the best I’ve had this side of the Atlantic.

After about a month of job searching, I ended up accepting an offer from a company in Washington, D.C., one of the most un-insurance towns in the country. So much for all that planning. But in a lot of ways we like the D.C. area more than NYC, so maybe it’s for the better.

From an optician in Union City. I don’t think they were trying to be ironic.

Before we moved to D.C. we made a little pit stop in a town called Plainsboro, NJ for a couple of weeks, and got to visit nearby Princeton. Maybe I’ll write about that experience in one of my future posts.

One thought on “Little Havana on the Hudson”